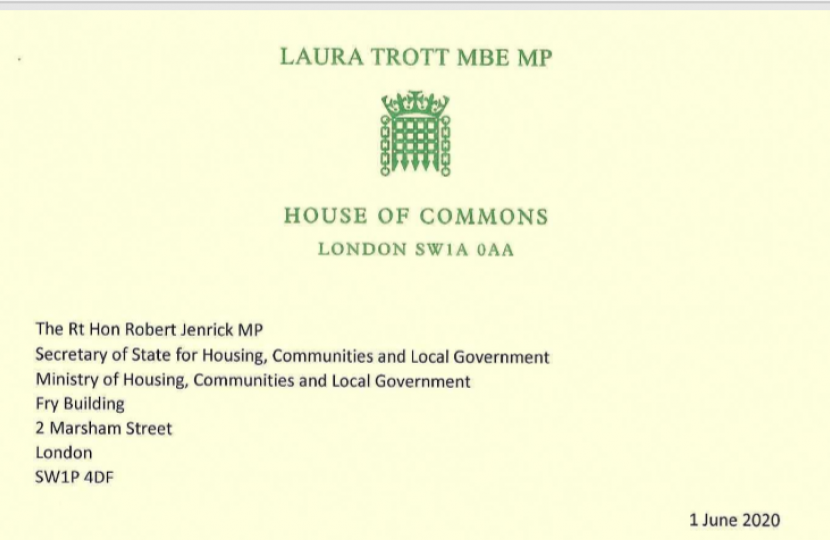 Laura Trott MBE MP, Tom Tugendhat MBE MP and Gareth Johnson MP have called on the Secretary of State for Housing, Communities and Local Government, The Rt Hon Robert Jenrick MP, to use his powers under the Planning and Compulsory Purchase Act 2004 to ‘call in’ the Sevenoaks District Council Draft Local Plan.

Following hearings at The Stag Theatre in Autumn 2019, the Planning Inspectorate asked Sevenoaks District Council to withdraw its Local Plan over concerns about its Duty to Co-operate. However, the District Council have refused to do so on the basis that they have already provided evidence to overcome this concern. As MPs representing all communities in the Sevenoaks District, Laura Trott, Tom Tugendhat and Gareth Johnson have asked the Secretary of State to use his powers to ensure that the recommendation from the Planning Inspectorate is reconsidered.

The Secretary of State for Housing, Communities and Local Government has powers under the Planning and Compulsory Purchase Act 2004 to ‘call in’ a Local Plan for further consideration. This has only been used in exceptional cases before.

Laura Trott MBE MP, who represents Sevenoaks and Swanley, said “It is obviously important that the need for housing is not only recognised but also met by the Local Plan. I fully support this. However, a Local Plan must also be robust so that local authorities can ensure the right type of developments happen in the right place, at the right time. Sevenoaks District Council has spent the last four years working diligently to achieve this. From engaging with thousands of residents, as well as neighbouring authorities, they have submitted a plan that importantly both protects the Green Belt, whist at the same time providing almost 10,000 much needed homes for the district.

“I share the frustrations of many that all this hard work is now sitting dormant, and I today urge, alongside my Kent Colleagues, that the Secretary of State intervenes so that the examination of the Plan can proceed and enable much needed housing and infrastructure (such as medical centres, transport and schools) to be provided across the district. As the MP for Sevenoaks and Swanley, I will continue to campaign until such needs are heard.”

Tom Tugendhat MBE MP, who represents Edenbridge and the surrounding villages, said ““Edenbridge and the surrounding villages are all wonderful communities with a great sense of belonging. It is essential that development happens to meet housing need, but only in the right places. I am concerned that the Planning Inspectorate stalling the Local Plan is putting at risk the hard work in developing a plan that works for the District.”

“That’s why I am asking the Secretary of State to use his powers within the Planning and Compulsory Purchase Act 2004 to take direct action, allowing the District Council to get its Local Plan adopted as soon as possible. It is not right for the Planning Inspectorate to block this for the reasons they have given, when the evidence is clear that Sevenoaks District Council met its requirements. I trust he can support this request.”

Gareth Johnson MP, who represents Hartley and Hodsoll Street, said “The Local Plan submitted by Sevenoaks District Council (SDC) is a sensible plan that reflects the housing needs of the local area whilst remaining sensitive to the character of villages such as Hartley. It meets the requirements of the Planning Inspectorate and I hope the Secretary of State recognises this. I pay tribute to SDC for taking this commendable stance and standing up for local residents”.