PRESS RELEASE: MPs welcome acceleration of safety upgrade to A21 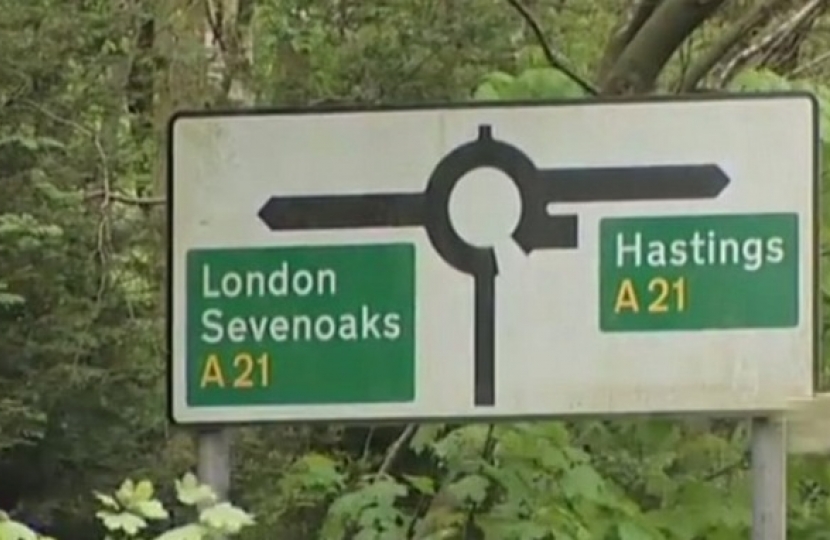 The group of MPs whose constituencies lie along the A21 have welcomed a new decision by Highways England to bring forward by five years comprehensive plans to upgrade safety along the route. The decision follows a meeting between the MPs and the Roads Minister in June in which the case was made to advance the works.

The upgrade will create consistent and standardised conditions along the single carriageway section together with improved pedestrian and cycling facilities.

In the Government’s Road Investment Strategy published in March the upgrade was not scheduled to begin until 2025 for completion by 2030.

Dissatisfied with this timetable, the MPs on the A21 route - Laura Trott (Sevenoaks), Greg Clark (Tunbridge Wells), Huw Merriman (Bexhill and Battle), Tom Tugendhat (Tonbridge and Malling), and Sally-Ann Hart (Hastings and Rye) met with the Roads Minister, Baroness Vere of Norbiton in June to push for this to be brought forward.

Highways England have now announced a change of heart: they will now commence their route strategy process in the autumn, with the upgrades due for completion by 2025.

Laura Trott, MP for Sevenoaks and Swanley said: “I am delighted that the Minister has listened to our concerns, and intervened on the decision regarding the A21. The road plays a critical role in controlling traffic across Sevenoaks and many of our local villages. The planned improvements, which will now be completed five years earlier than proposed, mean local residents can continue to use the road knowing it is safe for both motorists, pedestrians and cyclists. I pledged at the election to ensure the concerns of local residents were heard in Westminster – and this is what I will continue to do”.

Greg Clark, MP for Tunbridge Wells said: “As anyone who has driven along the A21 knows, once you get south of Kippings Cross large sections of the road are more like a narrow and windy country lane than the main route between London and Hastings. This makes journeys slower, more congested and more dangerous than they should be. The Minister’s decisive intervention, following her meeting with A21 MPs, is a big step forward A21 and is the latest step in our campaign to make the A21 into a safe, fast modern trunk road throughout all its length from the M25 to Hastings.”

Huw Merriman, MP for Bexhill and Battle said: “This is welcome news and I would like to thank the Roads Minister personally for intervening on this matter after hearing our case. It’s great news that these essential road safety improvements for this key trunk road in our constituencies will now be brought forward for earlier completion. I very much hope that these works will be delivered in good time.”

Sally Ann Hart, MP for Hastings and Rye said: “This is good news for the residents of Hastings and Rye, and all those that use the A21 from Hastings to the M25. As many will know it not only requires further dualling, but more urgently it needs safety improvements all the way along. I am thrilled that the work of the A21 Reference Group has paid dividends already in this Parliament and we are seeing this work taking place sooner than planned. As a group we will continue to fight tirelessly for a better A21 for all our residents and businesses, but this is a good start and I look forward to getting more improvements to this road in the future.”

Today I spoke in the Backbench Business Debate on the Coronavirus Job Retention Scheme.