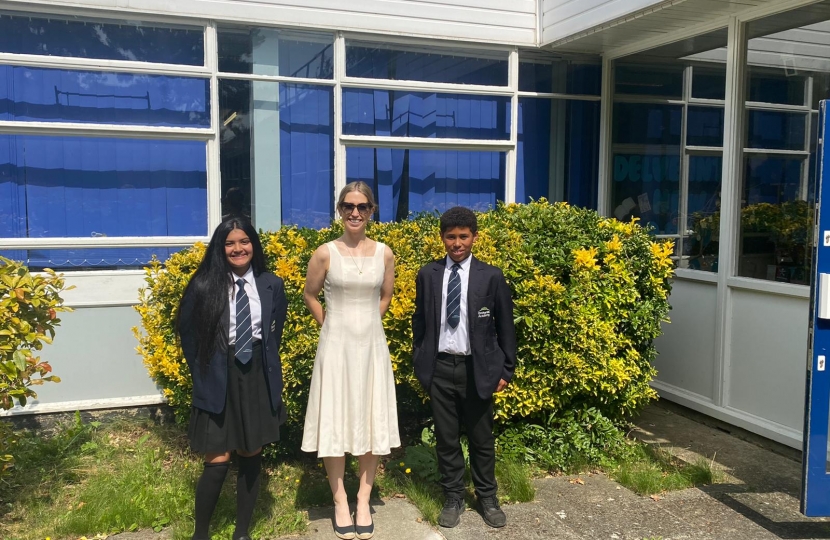 Laura Trott, MP for Sevenoaks and Swanley, has today celebrated the news that Orchards Academy in Swanley has successfully secured funding as part of the Prime Minister’s transformative school rebuilding programme

Over the last year she has asked both the Prime Minister and the Education Secretary about the funding in the chamber, and held separate follow up meetings with both Education Minister Baroness Berridge and Education Secretary Gavin Williamson, to help raise the case of Orchards Academy. Laura presented a petition in the House of Commons calling for Orchards Academy to be rebuilt. The petition was opened earlier this year and gained a total of 1,333 signatures from residents across Swanley and Hextable.

“I am delighted. I know from my visits just how urgently repair is needed, and it has been wonderful to see the local community truly getting behind this campaign .

“The pupils and teachers of this school deserve a safe and inspiring building in which to learn; I am over the moon the Government has listened to our campaign and will rebuild Orchards Academy. ”

“This is wonderful news, the prospect of replacing our tired old buildings with a new school is so exciting. Being able to learn and work in modern, state-of-the-art, well-built buildings will be transformational.  We are all proud of our school, now we will be able to be proud of the buildings too.  On behalf of the pupils, parents, staff and Governors I would like to thank the Kemnal Academies Trust and  Laura Trott MP  for their successful campaign.”

“The environment children are taught in makes such an enormous difference to their education. This programme will give thousands more young people the chance to learn in world class school facilities, levelling up opportunity and making sure every young person has the chance to succeed, progress and fulfil their potential

“As we build back better after the pandemic, with buildings that are net-zero in operation, this major ten-year rebuilding programme will help to shape the education of not only children now, but for years to come.”

“This fantastic news means we will be able to focus on making the educational experience of the pupils even better.  We all recognise the importance of a high-quality learning environment for the wellbeing and success of both our pupils and staff. The Swanley community will get the school buildings it needs and deserves. We are most grateful for the active and tireless support that Laura Trott MP has bought to the campaign for this rebuild.”

The School Rebuilding Programme, announced in June 2020, is part of an ambitious ten-year programme that will transform 500 school buildings across England, so every child has access to the best learning environment. Backed by £1 billion in government funding, the programme will rebuild and repair primary, secondary, specialist as well as sixth form colleges around England, with the majority of these projects are expected to be completed within three to five years.

The Government is also today confirming another core funding boost for schools through the National Funding Formula. Every pupil is set to benefit from the largest funding increase in a decade as part of £14.4bn funding increase, first announced in 2019.

Orchards Academy originally opened in 1958 as Swanley Comprehensive school.  In November 2010 became part of The Kemnal Academies Trust. Natalie Willbourn became Headteacher in 2013, since when it has been one of the most improved schools in the country and is rated as good by OfSTED.

At the start of the year, I wrote in the Sevenoaks Chronicle to reflect on 2021 and look ahead to the 2022. If you missed this, please do visit here.

Despite the challenges we faced with Covid last year, I am pleased we made excellent progress on many of my local priorities including: